My Night in Office 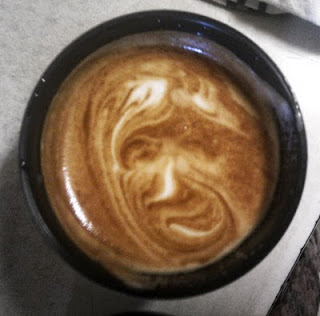 You can see hardly anyone in my office after 7.00 PM, it was one of those days when my team had to wait, I was feeling bad about it, but work is work :)

My team was almost done by 8:30 PM and we were about to leave when I got a call from my Boss who said the client wants to have a con-call and that too at 10.00 PM (Ah…! This is what happens when you are handling International Clients), I asked my team to leave and decided to stay back  for the call. My team left, there was no one in the office except the office boy at the reception who was half asleep, I was busy Tweeting, when I heard the coffee machine, I thought it was the office boy but I was wrong, he was fast asleep when I reached the reception to chat with him, it was almost 9.30PM, I did not wake him up, I decided to check myself, I went near the coffee vending machine, I could feel someone had been there… but who?

Our office is at the 7th Floor, the entire floor was quite, I was brave, I walked up to all the cabins to check if someone is in, and as I passed by, in one of the cabin’s there was a faint light, One gentleman was working on the Laptop, there was the hot coffee mug next to him, he was wearing a long Jacket, he looked at me and smiled, I’m Jack, I do night shift here…he got up to shake hands, when my spider rang, I had to rush to attend the call, I excused myself and said I will be back after the call and chat….

My call went up till 11.15 PM, but the call ended with a happy client saying good night.
I was dead tired, wanted to go home and sleep, was winding up, when I remembered the gentleman in the room, I had never seen him in office, I picked up my bag and knocked the cabin to see him, no one answered, I pushed the door , there was no light in the room, I switched on the light, there was no one…I assumed Jack had left, suddenly it stroked to me that he had mentioned he is doing night shift, then where is he???

I rushed to the reception, woke up the office guy, asked him about Jack he was clueless; he said there was no one doing night shift in office, I did not know how to react…but I’m sure, I will never forget my night in office!
Pin It
Posted by Unknown at 12:16 AM 3 comments

"ASK ME" about Secret Santa...

There are so many Children in the world who cannot celebrate any season or any occasion of the year, their hearts are full of dreams and expectations, however they bury them deep within, coz’ there are no ears to it, I wish I could fulfill many such dreams, and probably that is one of my dreams.

Let me share something with you, I’m not used to taking lunch from home to office, I eat out often... and fall sick one my colleague suggested that I should order food from someone called Aunt Martha who supplies delicious tiffin’s (food), I thought why not give it a try, I liked the food, it was indeed yum and delicious. Martha Aunty would deliver the tiffin’s regularly by 1.00PM. My lunch problem was sorted :)
One day Aunt Martha did not turn up at 1.00PM, I was hungry I waited till 2.00PM and decided to eat out, when  I was about to leave I heard a little girl calling out my name, she was only 6 years old, cute and innocent. Her name was Katie, she said Aunt Martha is not well and so she is come to deliver the tiffin, I asked her which school she goes? Where are her parents… and to that she never said anything not even a word.

Katie used to come daily I liked her, she shared everything about her , she did not know who her parents were, Aunt Martha had adopted her, and their only mean of living was the tiffin they supply. I respect Aunt Martha for that, all I wanted to see was a smile on Katie’s face forever, whenever I got a chance to make her happy I never missed it...Though I have changed my job place, I make time and drop to see her...I just want to see all her little dreams come true...

Specially, this Christmas ‘m gonna surprise Katie, I will be her Secret Santa :) and guess what when I was surfing online to order a gift I came across this Brand “ASK ME” they are actually sending Santa Claus to your loved ones house and giving surprise gift on your Behalf, Doesn’t that seem exciting Folks, and it’s not 10 , it’s not 20…its 100 Gifts free, I wish I’m one of those in the 100 people who want to gift their Loved ones. “People please pray for me.” I wanna make this Christmas Special for Katie…Hey “ASK ME Santa” do wish her on my behalf, I have filled the form :)
I wish Katie Happiness forever….

Friends if you want to wish your loved ones or want to bring smiles to innocent faces this Christmas do visit for more details on -  https://www.facebook.com/AskMe.Infomedia18