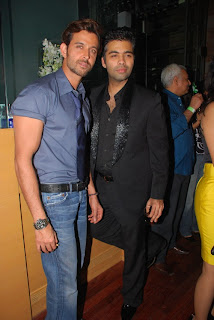 "Surprisingly, Karan has not approached Abhishek Bachchan to play Vijay Dinanath Chauhan, which was played by the actor's father in the original. While Hrithik is still deciding if he wants to star in the remake, Karan is sure that Hrithik is the perfect choice.

But why are we making a remake of the original…why can’t there be originality, or even if it is a remake, why say it, half of the motivation to watch a remake film almost dies, even before the movie is released, There definitely should be a remake, but it is to be treated with a different flavor, like, if so and so scene could have been changed, probably it could have been more interesting

Like for instance, why talk round and round the bush, Rohit Shetty’s Golmaal 3 was a remake, but it had its own humor, originality and freshness, and viewers enjoyed every bit of it…So the Idea is to show what people like to see again and again, with unique style and freshness.

Anyways, the remake version of Agneepath will be directed by Karan Malhotra. It is definitely going to be a great challenge for Karan Johar as well as a Hrithik to do justice to the film that achieved immense popularity and cult following previously.What do you think?
Pin It
Posted by Unknown at 2:00 AM